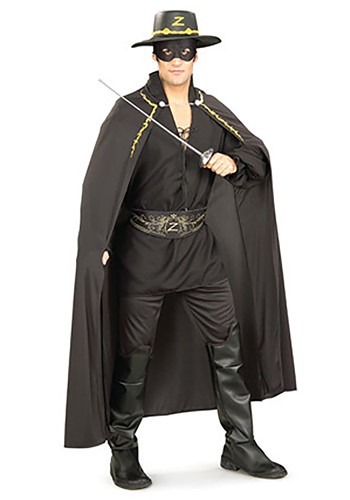 So you’ve decided to be a dashing black-clad masked outlaw who defends the commoners and indigenous people of the land against tyrannical officials and other villains!

First, you’re going to need a lil’ background info on just what kind of role you’re stepping into. Zorro - which is Spanish for “fox”, btw, and will come up later - has been around this game for a few years now. 1919, to be exact. Although some movie adaptations have placed him during early Spanish rule of California, when we first met Zorro, he was a Californio nobleman living in Los Angeles during the era of Mexico rule (between 1821 and 1846). His real name is Don Diego Vega (later de la Vega), but becomes Señor Zorro in the pueblo of Los Angeles in California "to avenge the helpless, to punish cruel politicians", and "to aid the oppressed.” When he is Diego by day, he acts like a “passionless fop”, but when he turns into Zorro, he not only becomes too cunning and foxlike for the bumbling authorities to catch, but also delights in publicly humiliating them, which leads his hero persona a certain sense of humor (which is nice, because what’s worse than a masked hero with no sense of humor?)

So basically, if you’re looking to take up the mantle of a mysterious, dashing, dark-clad nobleman, you couldn’t do better than this guy. And with this Adult Zorro Accessory Kit, you'll be off to a great start! It comes with a black cape, a black half-mask (very crucial to the Zorro look), and a belt that features a signature "Z" in front. Add black leather pants, black boots,a loose black shirt, and a toy sword, and you'll be ready to slicing "Z"'s into the air (and into the hearts of adoring fans) wherever you go!