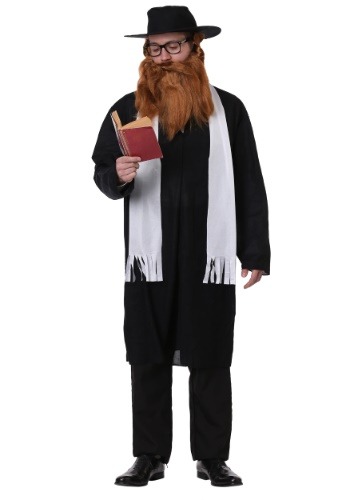 Shalom! You can party like a rabbi who’s ready to rock in this Rabbi Uniform Costume. He’s done all his recitations, and he’s ready to get down to some Matisyahu.

A priest, a minister, and a rabbi walk into a bar. Whatever ensues, it’s sure to be hilarious, if a little offensive in an old-fashioned, “Oh, Dad…” kind of way. Bring that spirit of Borscht Belt comedy with you––into whatever bar you walk into with whatever company––in this Rabbi Uniform Costume. Good times are sure to follow. Have a couple of friends dress up as a priest, nun, minister, monk, imam, or any other religious figure to drive home the point––you know, that you’re equal opportunity offenders. And hey, maybe you’ll even get down to some serious issues. It would be naïve to the point of offensiveness to suggest that the world’s religious conflicts could be solved if their leaders could all just walk into a bar together but… could it hurt? If you ignore religious restrictions on alcohol, that is. No shame in a club soda, guys!

Rabbi means teacher, but nobody likes a know-it-all, so make sure to keep your presumably wise but meandering and slightly inscrutable parables to a minimum when chatting folks up around the punch bowl at the Halloween party. While people may defer to your sagacious ways in this costume, don’t get cocky about your rabbinical authority––it doesn’t actually give you the training necessary to preside over a Kosher slaughter, a bar or bat mitzvah, or a bris. As the evening goes on, however, doling out a little bit of marriage counseling to your friends and acquaintances is never unwelcome, even from a non-expert source. Mazel!