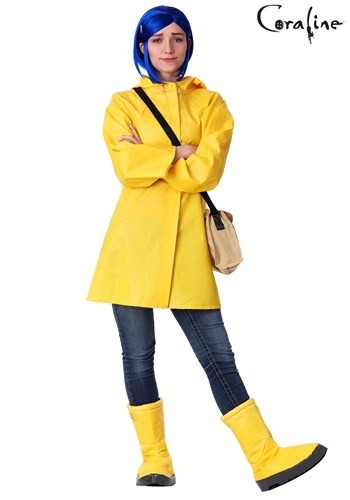 Other World or Bust!

Interested in taking a trip this Halloween? There are many prime locations for a destination celebration of everyone’s favorite spooky holiday but which is the best? Graveyards, abandoned asylums, and haunted houses may be the spots that come to mind first but we’ve got something even better in mind. Take a trip to Other World! There you can find a more fun and vibrant version of the world we all live in. You could also run into Other Father, Other Wybie, and maybe even a talking cat. Just watch out for Other Mother or should we say, BELDAM! That is one nasty character. All she wants is to replace your eyes with buttons and make a tasty meal out of your life. So yeah, we’d advise that you steer clear of that creepy monster.

This costume is not only super fun to celebrate Halloween in, but it is also quite simple to assemble. Start by tossing on the bright yellow moisture-resistant hooded jacket and you’ll look ready to weather any storm that comes your way while in Other World. A set of yellow boot covers to match your jacket will be the first addition to the ensemble. Finally, you can top off this outfit with the cute blue wig with an included dragonfly hairpin.

Transform into Coraline and celebrate this Halloween in Other World. She saved the souls of all the children that Other Mother had tricked and trapped. So who knows? Maybe Beldam won’t want to mess with anyone who even remotely looks like Coraline. Then again it may just be putting a target on yourself. Either way, this costume will look amazing on you and you will feel just as adorable as a storybook character. Albeit, a character from a really creepy storybook, but a storybook character nonetheless!