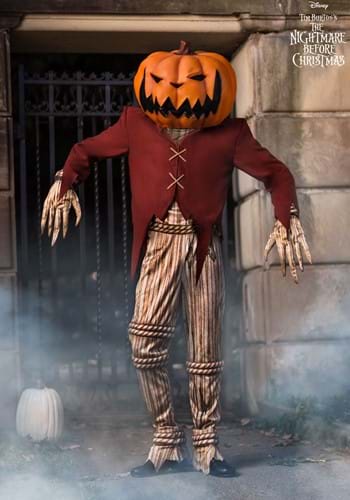 You know all about Disney's Jack Skellington, right? Of course you do! He's an icon of Halloween and of amazing animation. You can picture his skeletal face and its unusually expressive appearance. You probably know all about the black and white suit, the bats, and even what he looks like when sporting his Sandy Claws style!

But there's one problem with all that. For a guy known as the "Pumpkin King," we don't really have much pumpkin, do we!? Well, if you have a keen eye, you've probably caught Jack in his Pumpkin King look… and now it is time to bring that look to life.

Show Halloween Town in its spookiest style when you wear this officially licensed Adult Disney Jack the Pumpkin King costume from Disney's The Nightmare Before Christmas. Our Made By Us team worked to recreate the very first time we see Jack on screen. We've done it with a pair of tan pants and a shirt, each designed for comfort.

The attached jacket appears worn and jagged to help transform you into what looks like a standard scarecrow. But when you slip on the jack-o-lantern full-head mask, your transformation will be complete. Cackle and prepare for Halloween fun with this rarely-seen Jack Skellington ensemble.