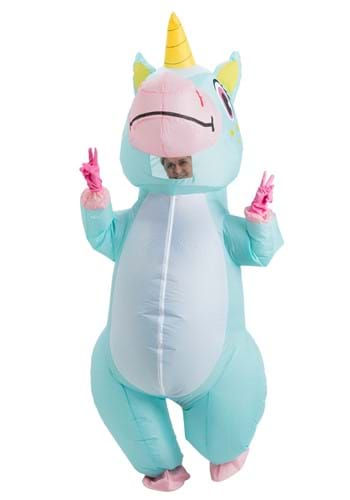 Once in a Blue Unicorn

Do you know what's even rarer than a unicorn or a blue moon sighting? A blue unicorn sighting! These magical creatures are extra special since they have a few details that make them unique amongst magical other magical creatures. For one thing, they have an unusual yet adorable shape. For another, they are the original party animals: they tend to show up where a big bash is in full swing.

Give your friends the bragging rights of being able to say that they've seen a fantasy creature! This Inflatable Blue Unicorn Costume for Adults zips up the front and is made of sturdy windbreaker fabric. An attached fan and elastic at the wrists and ankles keep it inflated the entire time you wear it. It's pastel perfection thanks to its pretty blue, white and pink color scheme. The enclosed head is printed with eyes, a nose, and a mouth, and has a yellow unicorn horn. A clear plastic viewing port below the mouth lets you see where you're going.

It's been said that a blue unicorn will appear whenever there's about to be an especially epic Halloween party. Apparently the rumors were true, but it turns out that the unicorn is also happy to lend its presence to school events, parades, birthday celebrations, and much more. Honestly, it can't resist a good time. You should see it on the dance floor, requesting the DJ to play an upbeat song about unicorns.