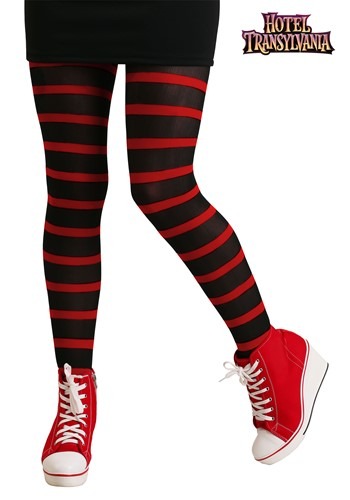 All know that mythological monsters have pretty detailed appearances. There are certain qualities that stand out immediately. You know that a ghost is going to be rather transparent. You also know that a werewolf should have a particularly large amount of fur (probably even when in their human form). Frankenstein's Monster better have some bolts ready for an electrical charge. (They hardly came with ready outlets in those days, after all.)

(Super)naturally, when it comes to the vampire, there are a number of expectations as well. Fangs. Bat wings. A handful of telekinetic powers at the ready. But, did you know that vampires also develop black and red stripes along their legs!? It's a for-sure way to identify vampires! All the research has suggested that it might be true. Well, actually, we've only seen them on one vampire. The rest are always wearing long robes, cloaks... or occasionally tight pants.

Alright, so maybe our suspicion is a little off, but if you want to look just like Mavis, these officially licensed Tights from Hotel Transylvania are a definite requirement. They are black tights with a stretchy waistband and knitted red stripes. A perfect way to complete your Mavis look!

Maybe the combo of blood red and black as night tights aren't a clear identifier of all vampires, but you'll be looking like Mavis from head to toe with the assistance of these officially licensed tights.