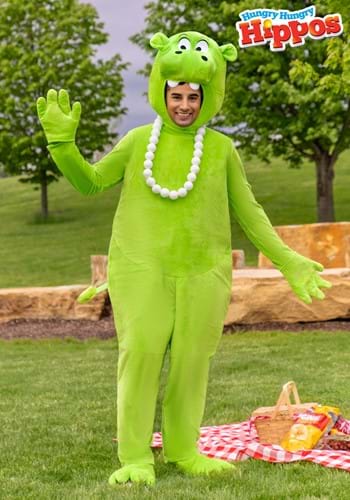 The Champion of Chomp

When it comes to feasting, you know what you're doing. When you're making a plate at a family gathering, you know to start with protein and move on to savory side dishes, bread can be balanced on the tippy top. What about the dessert table? Well, you're coming back for that. After all, there are only so many times a year that you get to indulge in marshmallow salad! Here's the question. Where did you get such magnificent chomping skills? You could thank your parents or the fact that you were always competing with your siblings for the last helping of mac and cheese. Or... it could be due to all of those hours absolutely dominating at a game of Hungry Hungry Hippos! Now, you can pay those hippos their due when you dress up as one for your next costumed event!

This fully licensed Hungry Hungry Hippo costume from Hasbro has our whole company chuckling. The ultimate nostalgic costume was designed by our in-house creative team. It features a soft green jumpsuit that zips up the back and can fit over your own clothing, making it a great option for when you need to change after work or head out trick-or-treating on a cold Halloween night. The green hippo costume also features oversized mitts, shoe covers, and an adorable mask that looks ready to chomp. The mask has an open face letting you easily see, talk, and most importantly, eat. To top it all off, our design team even added a necklace resembling the marbles straight from the Hungry Hungry Hippos game that you played as a kid!

They say that the hippo is one of the most dangerous animals in the wild. That's because of their amazing snack attack power. Show off your very own powers in this fully licensed Hungry Hungry Hippo costume this Halloween. Those costume party snack tables had better be fully stocked!