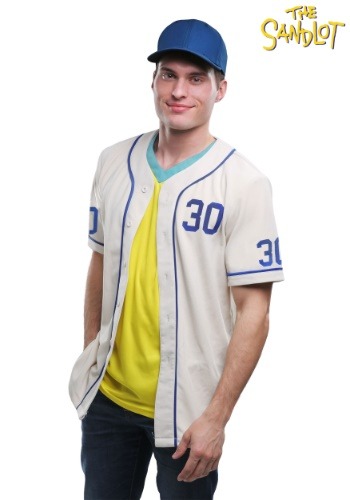 "Benny the Jet Rodriguez is now stepping up to the plate, with the score all tied up, bases loaded, with two outs on the board. Judging from his last two at-bats, he's eager to show the opposing team what his PF Flyers can really do out on the field. The pitcher winds up for the release, the ball whizzes by Benny right into the catcher's glove. Strike one! It's not like Benny to get caught looking at a pitch folks, he must be feeling the pressure. After shaking off a few of the catcher's suggestions, the pitcher looks ready for pitch two— a swing and a miss! Wow, that knuckleball is tricky and Benny tried to get a piece of it. It looks like the pressure might be getting the best of Rodriguez.

This is it, folks, it's down to the wire. The count is 0-2 and this could very well be Benny's last chance to pull his team into the lead. The pitcher winds up, delivers the pitch, and... BAM! What a magnificent swing! Benny launches a high fly ball deep into the left field. It's going... going... gone! See. You. Later! Benny 'the Jet' Rodriguez just hit a grand slam. This kid could be the next Babe Ruth!"

Become the sensational Sandlot slugger with big dreams of becoming an MLB player by suiting up in the Benny the Jet Rodriguez costume for adults. Officially licensed and made by our team of trendsetting designers, all three pieces of the costume (hat, jersey, and undershirt) are made from quality fabric. The jersey features real, workable buttons and Benny's number, 30, on the back, sleeves, and chest. The royal blue ball cap and yellow undershirt complete the costume. Practice sliding into home to really make the jersey appear authentic.

YOU'RE KILLING ME SMALLS

Ask your bestie to wear a dog mascot costume. He'll be the Beast to your Benny. Now, play ball!