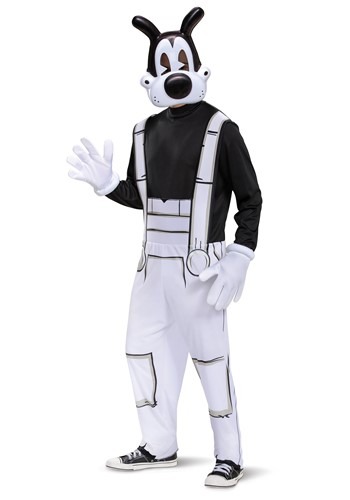 Boris the Wolf doesn't have many needs in life. He mostly just wants to be left alone to eat and sleep, his two favorite things (in that order). Usually, he's willing to hang out with his best friend, Bendy, too, though sometimes Bendy gets pretty annoying... like when he turns into Ink Bendy and goes on killing rampages, trying to hunt down all the other cartoons from the studio and turn them into monstrous fascimiles of their former selves. You know, typical best friend squabbles.

If he's honest, Boris would much rather just laze the day away on his couch than join Bendy in hunting down their former cartoon coworkers. But he won't admit that to Bendy, because he'd hate to hurt his feelings. Best friends do things for each other, like chase other friends through dilapidated hallways in their abandoned old workplace. After all, Bendy helped Boris move his couch last year, so Boris really owes him. What kind of friend would he be if he didn't team up with Bendy to take out all their enemies?

Have a creepy good time at your next costume party with this Adult Bendy & The Ink Machine Boris Costume. The 100 percent polyester jumpsuit looks just like Boris' costume from the creepy game! It features white overalls with attached foam overall straps on the front, over a black long-sleeved shirt. There's a hook-and-loop fastener on the back for easy wear. The costume also comes with white foam gloves and a plastic Boris mask that has mesh over its eye holes.

Best friends for life... and death!

Boris might not be the sharpest tool in the shed, but he knows the importance of friendship, and of being a good friend. If his best ever friend Bendy wants to devour all the souls that enter his old animation studio, then by good golly gosh, Boris will be there to help! After all, what are friends for?