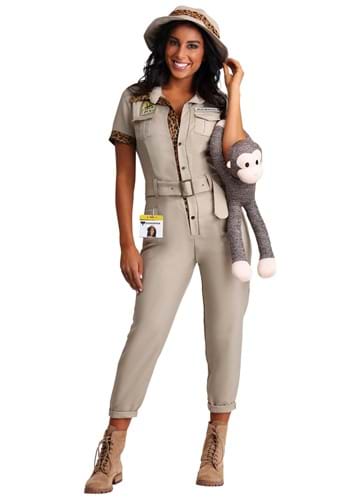 What's your Monday like? Do you have beastly coworkers at the beginning of the week like we do? It's like we start the week with ornery big cats and irritable camels and end it with playful spider monkeys and a couple of chill sloths (no offense, Gail). But if you were a zookeeper, the day of the week wouldn't matter, your coworkers would always be unpredictable. If you're worried about someone stealing your lunch from the refrigerator now, just imagine what would happen if you tried to eat your PB&J around the monkeys. It would be gone in an instant! Dave from accounting never stole your sandwich right from your hands, now, did he? Still, it would be pretty awesome if your Tuesday meeting was with a bunch of wallaby babies instead of the marketing team. And hippo happy hour? Well, that's an invite everyone wants!

You'll look like you're ready for some fun and fashionable zoo action when you're wearing this Made by Us khaki and animal print jumpsuit. The khaki color makes you look like you're ready to do some heavy lifting while the sparkly animal print keeps you looking wild. The top is belted in the middle, buttons up the front, and has two badges giving you an air of authority. Polished off with an animal print trimmed hat, you'll be ready to take on whatever the zoo's monkey's throw at you!

Are you sick of your coworkers acting like animals? Next time they show up late, make too much noise in the office, and steal your lunch, retaliate by showing up in this outfit. Nothing tells people to get civilized like hinting at their animal nature! What's that? That's not professional? Hmm, good point. Still! This is going to make a great Halloween costume even if everyone around you keeps wilding.