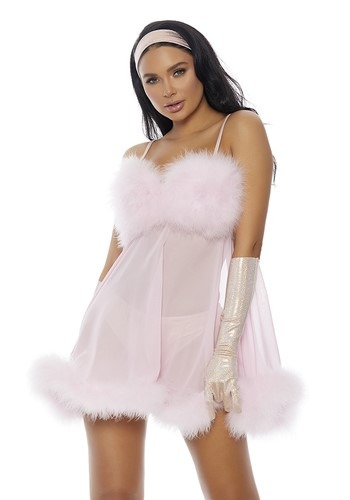 We've seen plenty of spy movies and science fiction flicks. The androids in them are getting closer and closer to the real thing. We've even seen spy movies where those robots get the drop on the human main character, taking advantage of certain human weaknesses! If we're to believe all those movies, then pretty soon, these sorts of robot spies will be living alongside of us with no discernible differences from the rest of us. They'd be some pretty unstoppable spies. After all, a world-class British spy would be powerless in the face of such realistic technology! Especially if it was wearing this Women's Femme For Real Costume.

Yes, this women's costume is the ultimate spy gear. The costume starts with a baby doll style garment with a fluffy chest with matching fluffy trim. It has a bra-style fitting and has an open "V" in the back. The matching pink panties stretch to fit and the pink gloves really help you assume the role of a secret spy, ready to stop a certain troublesome agent! Finally, the headband adds a nice touch to the whole look! And the best part? Well, you don't even have to be a robot to wear this cute outfit!

We wouldn't be surprised if you were instantly able to find employment with an evil genius when you wear this Femme For Real Costume. Just remember that your mission will be to stop any secret agents who come wandering into the secret lair!