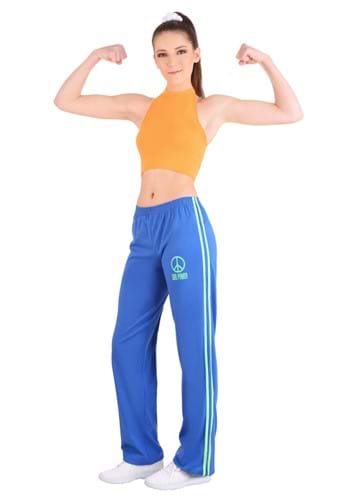 Imagine this. It's the late 90s. Boy band music videos play on MTV nonstop. Sugary sweet boy band vocals are slowly taking over Discmans across the world. They sing the songs of unending love... and use the word girl like it's the word "the." The only thing strong enough to stand up to the invading hordes of new boy bands is the unbreakable energy of girl power. It's your responsibility, no, your calling, to defeat boy bands across the land with energetic dance moves, songs about hanging with your favorite girl pals, and unison harmonies. It's time for you to form a girl band.

If that's what you want (what you really, really want) then you're going to need an outfit. You need an outfit that has the power to fight against boy bands. Well, this Athletic Girl Power Popstar Costume helps you cultivate that powerful aura of a true music charts warrior!

This exclusive women's costume is not for the faint of heart. Once you have it on, you will be expected to use your abilities in song and dance to fight against the dull drove of boring music populating the radio. The costume comes with a bright orange halter-style top. The bright blue pants feature bright neon piping down the side and feature and an elastic band in the waist. It even has a peace sign and the words "Girl Power" on the front.

Boy Bands Have Met Their Match

Once you have this costume, it's time to start your gameplan! First, you need to assemble a group of your best girlfriends. Then, you have to come up with an irresistible pop hit. After that, it's all about spreading your message of girl power to the masses to defeat the boy band menace!