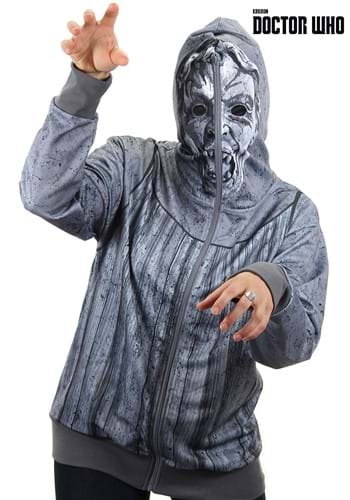 The Image of Nightmares

The kindly angel is supposed to be a welcoming sight. That is, of course, unless you're familiar with the world of Doctor Who. If you've gone traveling with the enigmatic Doctor for even a few seasons, you're fully aware that there are strange cosmic entities that are just waiting to get their hands on you! Don't worry, though. The Doctor knows all their tricks.

The Silents love to sneak around and blip out of your memory an instant later... so, frankly, it is tough to be truly afraid of those guys. The Daleks and Cybermen take turns trying (and failing) to dominate the universe but they all freak out as soon as the Doctor's name is tossed around. (Well, not his actual name, of course.) But, then there are the Weeping Angels. You know you're talking about something scary when even the Doctor tells you it's time to run!

Make sure that you're safe from the danger by zipping this Weeping Angel Full Zip-Up Hoodie around. Not only is the knit fabric comfy and cozy, but it is also decorated with Doctor Who imagery that will have you grinning from ear to ear. Zip the hood all the way up to transform into one of the enigmatic antagonists. Spy through the mesh eye openings and see how many Whovians you can time lock with your newfound powers of fandom!

Weeping Angels for Everyone!

They say that even taking on the image of a Weeping Angel is enough to bring one to life. That's why this Weeping Angel Zip-Up Hoodie is a gift that everyone will need. Keep yourself and your friends part of the Doctor Who universe!