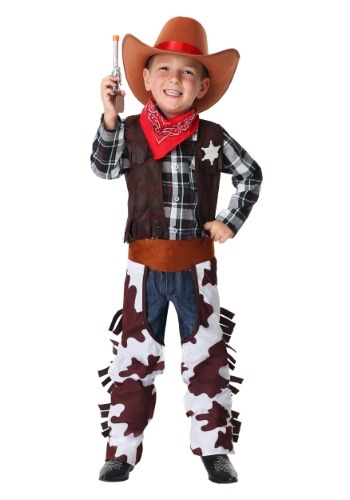 The idea of a cowboy has grown a lot since the early days of Western exploration. Once, you had to have a horse, a gun, a town to kick your heels up at, (boots with heels to kick), and an expansive land filled with outlaws, Natives, friendly cowpokes, and other unknowns that were just waiting to be discovered. And that doesn't even take being the Sheriff into consideration! We've seen a whole lotta new things develop since those initial days.

Now, we've got urban cowboys who settle up in larger cities and still try to keep hold of their Wild West roots. We've got a handful of buckaroos who've seen alien ships and had to see how well a six-shooter would hold up against extra-terrestrial technology. Heck, a few of those western folks have literally taken to spaceships themselves to explore an entirely new vast terrain! So, the question you've gotta ask your Cow-Kiddod is where they're gonna ride!

No matter where your kiddos want to explore, they're going to feel the thrill of the west when they slip into this exclusive Wild West Sheriff costume, handcrafted by our own downhome tailors. This outfit comes complete with a plaid, long-sleeved shirt and a brown faux suede vest witha fringed hemline. The cow-print chaps have fringe on the outseam and fit with a brown waistband. You know the look wouldn't be right without a cowboy hat or a shining bandana, so you can be sure we're giving you both!

SHERIFF OF THE STARS

Once your little cowpokes start living out their dreams of the wild frontier, who knows where they'll take 'em! Whether chasing down bank robbers or just trying to keep the town safe from all those varments, your little sheriff has got our vote for office!