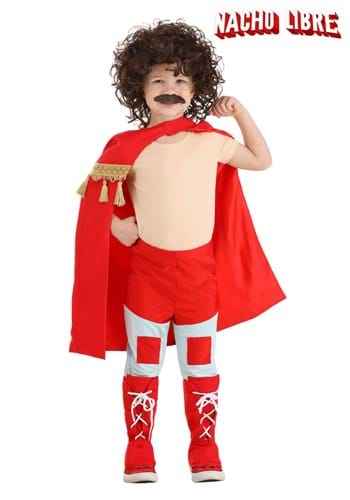 You knew your kid was special! Sure, everyone might say that but when your kid was born he seemed to have an extra little sparkle in his eyes! You knew he was bound for good things when Susie reached over and grabbed that building block right out of his mouth, he frowned for a second and then you actually saw him shrug before grabbing the other block on the ground. You've never seen a baby shrug in your life so that must bode well, right?

As your saintly kid got older you started to wonder if he was truly an angel. Yes, he got along well with other children and didn't cry very often but he seemed to have a love of bright colors, drama, and horse play. You began to think back to a tale you heard back in the day. A tale told of the actor, Jack Black. A tale of a humble monk who worked in an orphanage, making the soup every morning until one day he was inspired to follow his dream. He decided that he would go into the world and become the luchador wrestler that was dormant inside of him the whole time! Now, your child is still young but it's important to set your child on the path that you dreamed up for them early, otherwise, they just might get ideas of their own. And what occupation could your child possibly dream up that's better than luchador monk?

He might not be quite ready for the ring but he'll certainly feel like it in this dramatic costume. When he puts on the boot covers over the blue pants and briefs he'll feel stronger than he did moments earlier. Then, when he puts on the cape he might not be able to control his power. Put that mustache and wig on him and no one will be able to control their laughter. Because other than a luchador monk, what's better than a baby in a mustache?