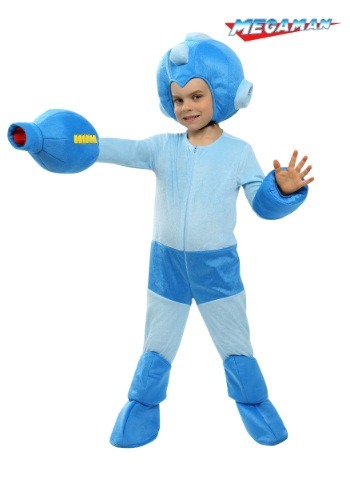 What's your plan for a robot attack? You know Dr. Wily has been toiling away in his workshop, creating the next batch of robot masters, right? He's just waiting to unleash them upon your neighborhood and we think you'd better have a plan to deal with them!

Help against the next crisis may just be a bit closer than you think. We have a hunch that your toddler has a enough energy to power up one of Dr. Light's Mega Busters, so all he really needs to battle against all of the evil robots of the world, is a cool outfit to wear. It just so happens that we're pretty good friends with Doctor Light and he helped us create this Mega Man costume for toddlers. It's based on his greatest creation, Mega Man, and once your child has it on, even Guts Man won't be a problem for him.

The costume comes with everything a kid could need to transform into the signature video game character. The light blue jumpsuit has dark blue accents to recreate Mega Man's outfit, and a front zipper. The Mega Buster arm cannon piece fits over your child's hand like a glove and is made out of soft fabric. The blue helmet fits with a strap under the chin and finishes the look.

Once your child has it on, you'll instantly feel safe, even if Dr. Wily shows up outside your house, hovering around in his UFO.