The Pink Panther Costume For Adult 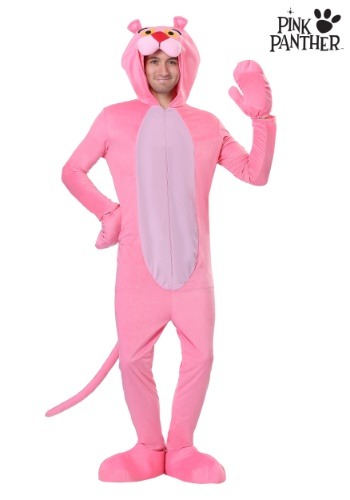 BORN OUT OF MUSIC

The early 60s brought us a fantastic series of films all centered around a rather clumsy detective who, honestly, had no business trying to solve any crime! His heart was in the right place... even if his brain rarely was. Still, luck comes to everyone (eventually) and some folks even more often.  So, Inspector Jacques Clouseau somehow manages to solve all his crimes, even becoming Chief Inspector because of it!

The weirdest part of the series of films wasn't the comical quality of Clouseau.  It's the fact that the opening animation to the movies would become so beloved that it would evolve into a character all his own!  The mute and cute pink-colored panther was supposed to just represent the first item stolen.  Instead, he'd star in The Pink Panther Show for a literal six seasons and a movie!  That's pretty successful for a cat that usually can't speak!

Whether you're a fan of the bumbling inspector or the friendly furball, our fanatic design team has created the snuggliest (and officially licensed) Pink Panther Costume that you've ever felt.  This exclusive hooded jumpsuit zips up the front and has a set of soft-sculpted ears and a panther muzzle on the hood.  Your stuffed tail is sewn to the back and foam shoe covers keep the whole look being delightfully convincing.  Oh, did we forget to mention pink!?  The entire look is going to bring a smile to everyone's face and either remind them of an amazing old-time cartoon character or have them racing to learn more about the curious critter.

It might be difficult to write out the lyrics of the theme song that gave birth to the classic character of the Pink Panther, but it isn't going to be at all a trouble to enjoy yourself while you're prancing around in this iconic and custom-designed Pink Panther look.  This is one curiosity that won't be at all difficult to solve!