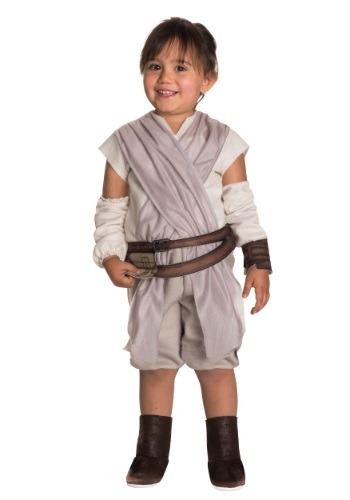 Costume Child White Gloves
$4.99
Add
Product Information
Items Included
Features
Lady Star Wars fans have always had Princess Leia to look up to as a role model. She was tough as nails, and a respected leader, but generally she didn't get too down and dirty battling her foes. Well, in 2016, girls and women got a new role model in the form of Rey in The Force Awakens, and this Star Wars hero is not just capable of kicking butt, she will straight up lay the smack down!

If you'd like your girl to be the kind of girl that doesn't need any boy to hold her hand, why not get her started by outfitting her with this Force Awakens Rey costume. Sure, she's just a toddler, and isn't going to be ready to battle with a bo staff, or even scavenge the carcass of a Star Destroyer for valuable parts, but that's no reason not to get her started on the path towards becoming a strong willed woman.

This costume replicates the signature style of the character's Jakku costume in Episode 7, and will let her become the desert dweller who's ready to go on the adventure of a lifetime. She can team up with her friends or siblings to form a Star Wars group, or with her parents for a great family group theme. When Finn, Rey, and BB-8 hit the Halloween scene, they might not be ready to battle Kylo Ren, but we're sure that the First Order is going to be finishing last in the trick-or-treat candy tally!