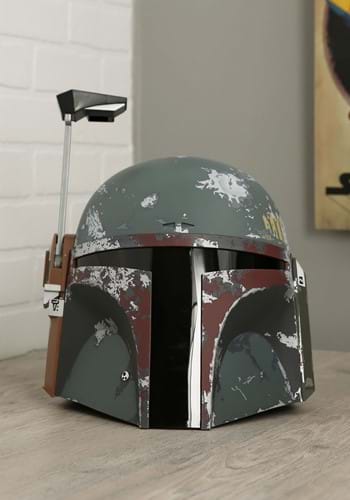 You know what happened to poor Boba Fett. After a lifetime of seeking vengeance for his father's death at the hands of the Jedi, the most dangerous Bounty Hunter in all of the galaxy met his end by being chucked into the Sarlaac Pit. Yep, that big, ugly, tooth filled monster on Tatooin. Hardly a worthy demise for such a mighty Mandalorian, right!?

Well, here's the thing. The Sarlaac digests its delicious tidbits very slowly over an incredibly long time. Even by the conclusion of the sequel trilogy, Boba has a lot of time to escape. Sorta like that old philosophy: until the box is opened, we never know what really happened to the cat, right!? Well, it's about time to look in on old Boba!

Bring Boba Fett's fate back to life when you bring home this officially licensed Boba Fett helmet. This is a Black Series helmet that faithfully recreates the iconic bounty hunter's look. The helmet has an inner lining for comfortable wear but works just as well as a talking piece of Star Wars memorabilia. The design shows the battle-worn look of a helmet that has definitely seen better days... but isn't that what makes a Mandalorian helmet look so awesome!?

While everyone has been assuming that the Bounty Hunting Fetts were long gone, you'll soon prove that his memory is definitely alive. This helmet brings back all the best Boba Fett details and even makes us remember that if anyone could escape a Sarlaac, it'd be this guy!