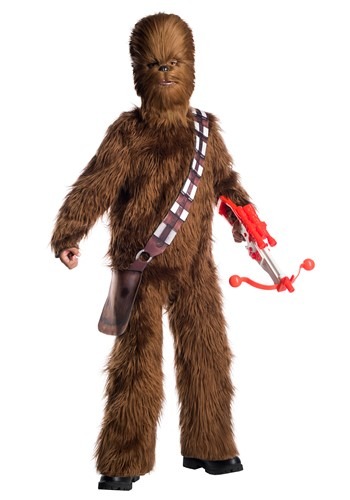 Chewie isn't some kind of rookie Wookiee! Before he was Han Solo's first mate, he fought against the Separatist Droid Army on Kashyyyk. Then during his travels with Han, he took part in the rescue of Princess Leia. After that, he narrowly escaped capture by Darth Vader in Cloud City and he later helped defeat the Empire on Endor (even if he did get everyone caught due to his rumbling tummy). He tagged along with Rey to defeat the First Order and he even hung out with some Porgs on Ahch To. The big hairy guy has done it all!

Is your child no Star Wars rookie, just like Chewie? Then maybe your young one is ready to become the famous Wookiee from the Star Wars movies!

This Star Wars Chewbacca Costume is a deluxe costume for kids that has plenty of details that any discerning young fan will appreciate. To start off, this costume comes with a full jumpsuit that's covered in brown faux fur that mimics the look of real Wookiee fur. The foam bandolier is attached to the front and even has a small foam pouch that hangs at the waist. Of course, this costume comes with a molded mask, which fits with an elastic band. The mask features a layer of faux fur in front to recreate Chewie's fuzzy face. When your child has the whole ensemble on, they'll be ready to jet across the galaxy in the Millennium Falcon for the next big adventure.

For Any Young Wookiee Wannabe

If your young Star Wars fan wants to become the one and only Chewbacca, then this costume is right for you. With plenty of faux fur and a realistic mask, it's an easy choice for any Wookiee wannabe! Just make sure you equip your new little smuggler with a blaster, since you never know what kind of dangers they'll run into while exploring the galaxy far, far away.