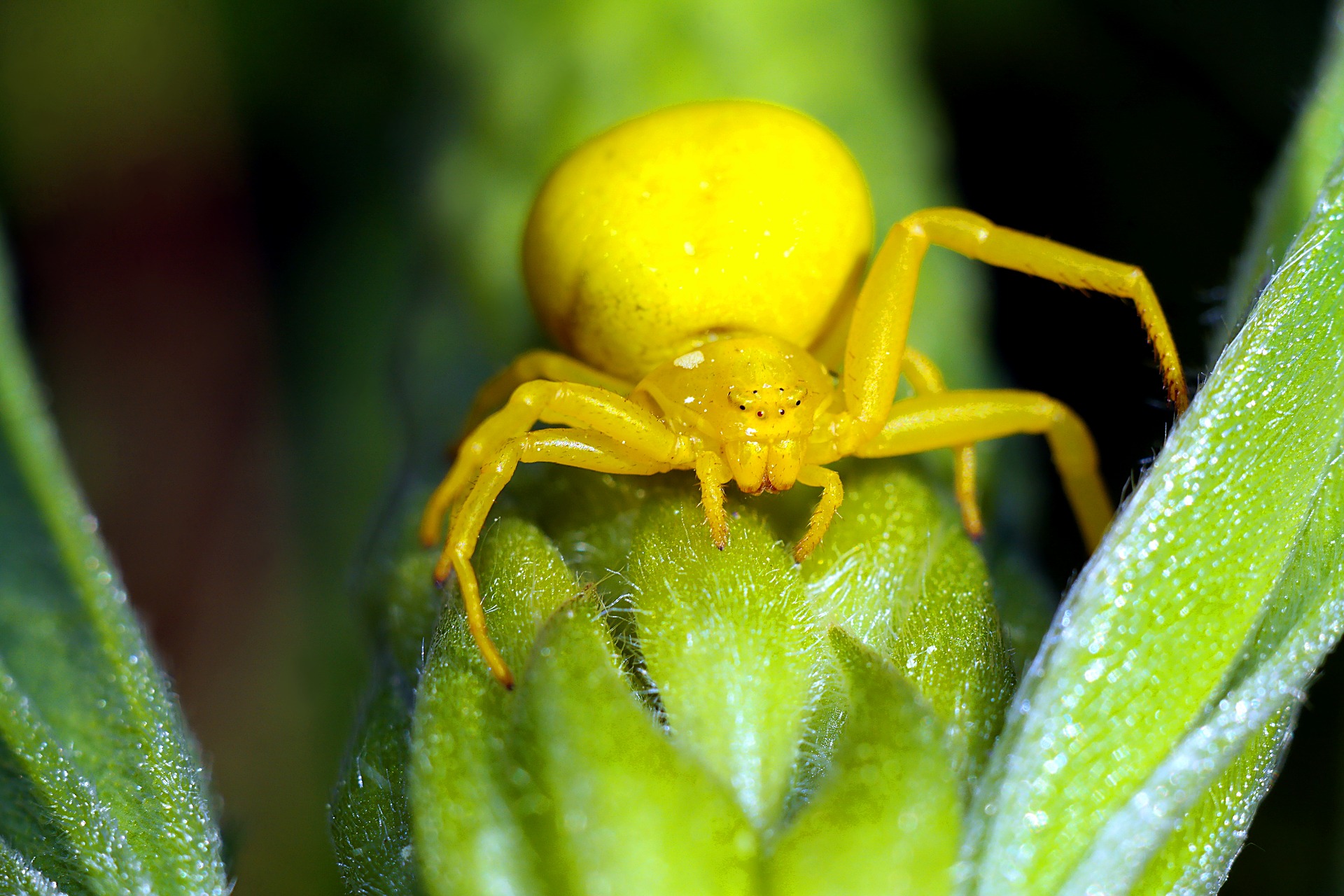 Spiders are members of the arachnid family, as are ticks, mites, and scorpions. Arachnids all have eight legs and two body segments without wings or antennae. Arachnids do not chew their prey, and they are set apart from insects because insects have just six legs and three body segments. Insects, arachnids, and crustaceans belong to the arthropod group of animals, which contains more than 30,000 species and is the largest group of animals in the entire animal kingdom. As predators, spiders even prey upon other spiders. The remains of spiders have been found in amber dated approximately 2 million years ago.

The Body of a Spider

Female spiders tend to be larger than male spiders. The front body segment of spiders is the cephalothorax. This segment includes the eyes, fangs, brain, stomach, and glands that produce poison. Legs also connect to this segment, and pedipalps are small appendages located beside the fangs used to hold prey. Typically, spiders have eight eyes, although some spiders have fewer eyes. The second segment is the abdomen; the back end of the abdomen is where the spinnerets are located. The spinnerets are the glands that produce silk. Spider legs are covered with hairs designed to detect smells and vibrations in the air. Claws are located at the ends of the legs, and each leg has six knee joints for a total of 48 knees. Spider bodies produce a special oil that prevents them from sticking to their webs. Spiders have exoskeletons, which are outer shells, instead of an internal skeleton. Immature spiders shed their exoskeletons as they grow, a process known as molting. The molting process involves the spider crawling out of the old shell, emerging through the cephalothorax. As the new exoskeleton hardens on, it must stretch itself out to ensure that it has sufficient growing room. Adult spiders are no longer growing, so they don't molt.

Every spider has fangs, and most spiders carry venom in their fangs. Because the venom of most spiders is weak, it won't harm humans. Generally, spider venom serves to paralyze prey while the spider consumes it, but some venom is potent enough to kill the prey. Black widow and brown recluse spiders have venom that is potent enough to injure humans. Untreated bites could even cause death in humans. Although tarantulas seem menacing, these spiders have small venom glands, delivering bites that are comparable to a bee sting.

Every spider makes silk. However, not every spider spins webs. Spiders use their silk to spin webs, build egg sacs, wrap their prey, climb, and make walls in burrows. The spinnerets located on a spider's abdomen are openings through which the spider releases its silk. The silk is liquid when it emerges from the spinnerets, and the liquid hardens in the air. Spiders also use their silk to make draglines, which are special pieces of web that they use to drop from webs or climb back up if they fall.

Silk can vary depending on the type of spider, and it may be dry, stretchy, or sticky in nature. Silk is very strong, so spiders can use it to move from object to object. Spiders may even use it to catch the wind and let the wind carry them across the miles, known as "ballooning." Spiders will consume their silk, recycling it to produce fresh silk.

Some spiders use their silk to fish for prey. After zeroing in on the prey, the spider will produce a line of silk with a sticky substance at the end that will affix to the body or wing of the prey. Once attached, the spider simply reels in the prey to capture it. Large spiders can create very large and strong webs that are big enough to catch birds, fish, rodents, and bats.

While many spiders spin webs to catch prey, other spiders are active hunters. The hunting spiders use their webs in other ways. Spiders are born knowing how to spin webs. Spiders that spin circular webs are known as orb-web spiders. These webs are designed to trap insects with their sticky silk. Often, spiders will spin a fresh web every night, but some spiders will just make repairs to their existing webs instead of making fresh ones. Orb webs can be very intricate.

Sheet webs are another type of spider web, spun horizontally with a series of non-sticky lines positioned above the web. The lines are present to cause insects to fall into the sheet web to capture them. Funnel webs are another type of web, named for their funnel shape. These webs are wide at the top, becoming narrower toward the bottom. The spider lurks at the bottom of the funnel, waiting for prey to drop into the web.

Despite their large number of eyes, most web-spinning spiders have weak eyesight, so they focus on the vibration of web strands to tell them where prey is located on their webs. After catching prey, the spider will descend on it and wrap it up in silk. After wrapping it, the spider will pierce the prey with its fangs, injecting poison into it. The poison causes the prey's internal organs to liquefy, and then the spider extracts the liquid to consume it.

Spiders that don't make webs are hunters, and these spiders use other means of finding their prey. Some hunters camouflage themselves while they wait for their prey to pass by them. Other hunters pursue prey, finding them easily with their keen eyesight. Hunting spiders are equipped with good eyesight, sharp fangs, and fast-acting poison.

The trap-door spider digs a hole for its home. This spider spins a door out of silk, and it then waits inside the hole on the other side of the silk door for prey to come close. At that time, the spider will jump out and grab the prey. And the jumping spider jumps on its prey. This spider fastens itself with a safety line before it jumps so it can return safely to its home.

Because spiders don't have teeth and don't chew, they have to consume only liquids. Spiders can do this because they inject poison from their fangs that causes the insides of their prey to turn to liquid. Once it's liquefied, spiders simply suck up the liquid, leaving the empty shell of their prey behind. Some spiders use their fangs to crush the body of their prey after wrapping it in silk. Their digestive juices then cover the prey's body, turning it to liquid.

The mating process of spiders can be dangerous for male spiders. A male will use his claws to create tiny vibrations in a female's web, being careful to make the vibrations gentle so the female doesn't think that a meal has arrived. Some male spiders will perform a dance to attract the female, while others wave their front legs. Male nursery web spiders present females with a wrapped insect. If the female is suitably impressed, she will mate with the male. The female may eat the male after mating is over.

After mating, the female will lay anywhere between two and 1,000 eggs. The female spider spins a special silk bed for the eggs with a blanket to cover them. Then, the spider spins an egg sac to encapsulate the eggs fully and hangs the sac in a place where she can guard it until the babies are ready to hatch. The babies may stay inside the sac after they hatch, continuing to develop.

The mother might stay with the babies until they emerge, or she might leave them without ever seeing them. The wolf spider remains connected to her egg sac, carrying it with her until the eggs hatch. After the babies are born, the spiderlings climb onto their mother's back, where they stay until they finish developing. The spiderlings may stay on the mother's back for weeks, and she takes them everywhere she goes. If a baby falls off the mother, she will pick it up and put it back on her back.

What Are Spiders Afraid of?

Spiders can have many enemies. Birds, monkeys, toads, and lizards hunt for spiders. Ticks might attach themselves to spiders to consume them. The spider wasp is a common enemy of the spider, stinging it to paralyze it. Then the spider wasp digs a hole and places the spider into the hole along with an egg. After the egg hatches, the baby wasp eats the paralyzed spider. Humans are also enemies of spiders, killing them with pesticides or by squashing them.

With their physical features and strength, spiders are designed to live virtually anywhere. Spiders can live in very cold environments, on the tops of mountains, and even in the oceans. Spiders can be found in the coldest parts of Antarctica and the hottest desert regions. Spiders live under the ground in burrows, up in high treetops, in cracks and crevices of rocks, and in homes.

Stories and myths about spiders have been popular for generations. A Greek myth tells the story of Arachne, who was a thread-spinner. The goddess Athena was jealous as Arachne bragged about her talents. The two entered into a weaving contest, and Arachne wove pictures that depicted the gods negatively. Athena was angry, and she turned Arachne into a spider so she would have to weave webs for the rest of her life. In African folklore, spiders tend to be tricky but learn lessons about their trickery. The children's rhymes about Little Miss Muffet and the Itsy Bitsy Spider are common favorites, and these rhymes could be connected with Halloween costumes or other entertaining activities.