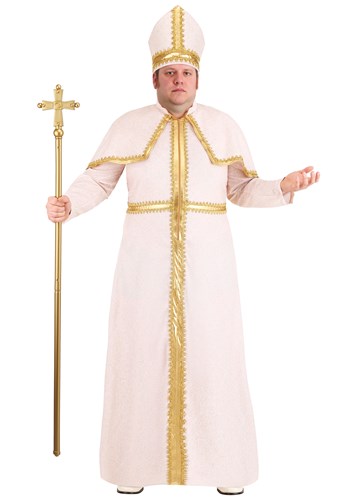 We know what you’re thinking… Popes probably never have any fun. After all, when they’re in charge of a whole religion and have to always be good all the time, how could they ever find time to just cut back and let loose? They’re probably always praying and reading Latin. They have super boring lives.

But it turns out, that’s actually wrong! Popes across the years have had some pretty wild experiences. Pope John II was only 18 when he took over the papacy, and apparently he loved to party more than he enjoyed doing any actual church work. Pope Benedict IX “quit” his position twice and ended up with three separate reigns. Meanwhile, Pope Formosus was actually dug up after he died to be put on trial…twice! He was found guilty both times, but we think we might have gotten a bad rap, since he couldn’t exactly testify to his own defense!

So, we guess popes know how to get into trouble and have some fun, too! That’s why dressing up like one for your next costume party isn’t as crazy as people might think (though it may just be as crazy as some of those popes!).

Dress for perfection (though maybe not heavenly perfection) with this exclusive Plus Size Men's Pious Pope Costume. The floor-length white tunic is 100 percent polyester and features a subtle tone-on-tone floral print, along with a built-in cape. It has a front zipper for easy wear, along with a stylish metallic gold braid trim at the waistline, center front and cape edges. The costume also comes with a foam-backed miter hat with metallic gold braid trim as well.

You may never party hard enough to end up on the “craziest popes” list, but you’re sure to have a wickedly good time with this costume!