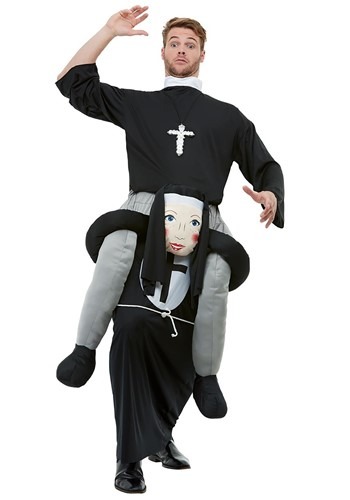 Get Me to the Church On Time!

Father Thomas had a bad habit of arriving at Sunday Mass after the last bell rang. He'd show up sweating and apologetic at the pulpit almost every weekend. But since he was charming in just about every other way, his parishioners let it slide. That is until he showed up ten minutes late when the Bishop was visiting and the higher-up had to take his place. That was the last straw. Then the church decided they had to do something, they installed Sister Margaret in the rectory the very next day. She was often seen hauling the sleepy priest out of bed and sprinting to the church with the father on her shoulders to ensure that by the time the church bells rang, the constantly tardy Father Thomas would be bright-eyed, bushy tailed, and ready to receive his congregation.

Piggyback costumes are a hit for a reason, they look absolutely hilarious when in action! With stuffed pantlegs and shoes under the nun's arms, this costume will make it seem like this sister is doing some seriously heavy lifting, but of course, your real feet will be strolling along under her habit. The costume also includes the priestly top so that the storyline is nice and clear!

There's no way this priest is going to be late to mass ever again, not with this nun in charge! This costume is sure to make Catholics and Protestants alike cackle with glee. Perfect for Mardi Gras or Halloween, this costume is one size fits most so that you can share the costume once you've gotten enough amusement out of this illusion. And until you hand this costume down, you can be sure it'll bless you with a holy good time!