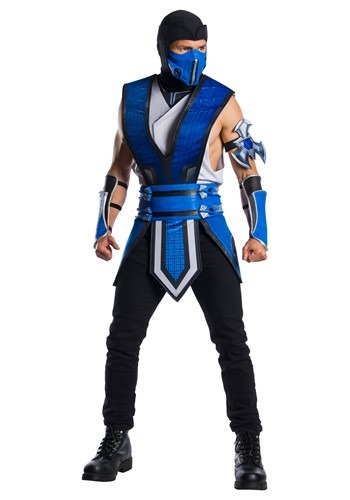 Oh yeah, we played the original Mortal Kombat game. The first time we saw Sub-Zero in the roster, we were like, "Hey, cool. This ninja wears blue. Let's give him a shot."

Of course, that was before the internet was really a thing. We had no idea what sort of special moves he had. We just hammered that d-pad and mashed the attack buttons, desperately trying to defeat our friends. Then, something completely magical happen. Somehow, we mashed the right sequence of buttons... and a blue blast of ice shot from his hands, freezing our opponent. It was just 3 simple buttons! After that, we could take our sweet time administering some serious pain to our opponent. It was completely and utterly mind-blowing! Ever since then, he's always been our main man. From the original game, all the way to Mortal Kombat 11, Sub-Zero is always our top choice, because his ice move is clearly the coolest thing you can be doing in a fighting game!

Since Sub-Zero is our main man, you can imagine how excited we were when we found this Mortal Kombat 11 Sub-Zero Costume. The officially licensed costume is based on the iconic fighter from the video game series and comes with a sleeveless top that incorporates his signature dark blue colors. It also comes with a matching blue mask to help you look like one ice-cold ninja. The arm guards strap onto your forearms to finish the look. The whole ensemble might not give you the ability to shoot ice from your hands in real life, but it'll at least give you an intimidating look that will even have Scorpion shaking in his boots!

If you're a huge MK fan, or if you just want to be a stone-cold assassin, then this is the costume for you! Officially licensed from the video game, you'll be ready to battle it out with the forces of the Netherrealm!