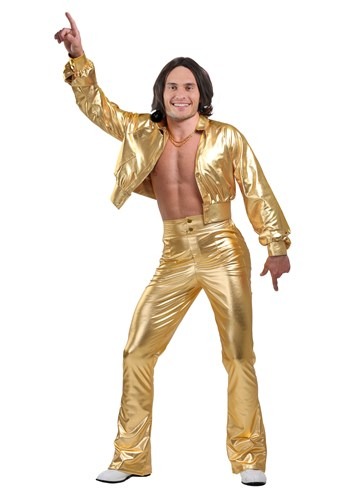 Only one man can be king of the disco. Sexy, suave, sophisticated. Capable of any dance move out on the floor. Something like that. Does that sound like you? Nope, of course, it doesn't! Because you've never taken the time to get a super premium disco outfit. It takes time to work your way up the dance floor rankings, and starting out with an average discotheque suit is only going to take you so far. So, don't play no games! Start your dance floor career outright and proper with this Men's Plus Size Studio Disco Costume!

Only one man can be king of the disco, though, and we think you’re qualified. Just look at the other guys. Some might try to do the hustle dance under the disco ball. Other guys might try to funky chicken their way to royalty. Some guys even think that doing the YMCA dance on the dance floor is their one-way ticket to being king. But you're no chump. You know the jive. You can dig it. Whether you've got the sweetest singing voice or you can just point towards the sky like you mean it, you're going to have the look to match your ambition with this throwback 70s getup.

Styled as a pants and jacket combination, it features a gold metallic finish on both the top and bottoms. The jacket actually buttons up, so you can wear it with a super fly wide collar button-up, or just bare your chest for all the other disco players to envy. (That would be SO 70s!) Finish your retro style with a thick gold chain, a long-haired wig, and white platform shoes. You're going to be the most stunning disco bachelor to ever hit the scene. Studio 54 is never going to know what hit 'em when you make your first appearance!