Kids Queen of the Nile Wig 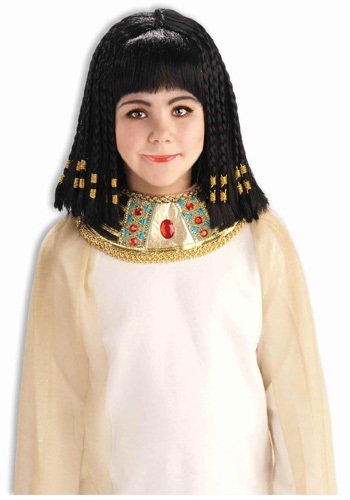 The desert suits her!

Did you know that Cleopatra could speak at least seven languages including Greek and Egyptian? She was also educated in mathematics, philosophy, oratory and astronomy! Did you also know that she wasn’t actually Egyptian? While Cleopatra was born in Egypt, she traced her family origins to Macedonian Greece (but still embraced many of her country’s ancient customs and was, in fact, the first member of the Ptolemaic line to learn the Egyptian language). And that’s just two small facts of her amazing life: During more than two decades as Egypt’s last independent pharaoh, Cleopatra engaged in ruthless power struggles with her siblings, battled the future Roman emperor, and engaged in military alliances—and passionate affairs—with Julius Caesar and Mark Antony. And while modern legends speak of her incomparable beauty, it was actually her mellifluous speaking voice and “irresistible charm” that made her so desirable. Not a bad role model for a young, headstrong ruler like yours to emulate!

But to keep your Egyptian princess reining on high, she'll need a powerful accessory. Your dessert flower will transform into the powerful goddess Isis once she's in this Child Queen of the Nile Wig! Made of 100% synthetic hair, this wig is styled black hair with gold ties for an authentic Egyptian look. Pair it with your favorite Egyptian Princess costume (don't forget that statement jewelry and those strappy sandals!), and maybe even add some dark kohl-rimmed eyes. When her look is complete, she'll be feel powerful as Nefertiti, Hatshepsut, and Cleopatra combined