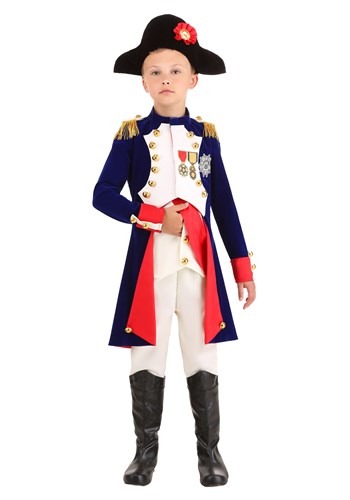 Can you imagine it? Your child as the head of one of the most successful military campaigns the world has ever known! Your child as a leader of men and a conqueror of countries! Why, he could even name himself the Emperor of France and extend his rule over most of Europe!

Based on the historical military figure, this Kids Napoleon Bonaparte Costume does a great job of recreating the classic look of the French leader. The outfit is inspired by various historical portraits and begins with a blue jacket with pauldrons and a white front that has decorative gold buttons. The included vest fits underneath the jacket for a layered look. The off-white pants have an elastic band in the waist for a comfortable fit. The sash is bright red and fits loosely over the vest. Finally, the hat mimics the look of Napoleon's hat from artistic portrayals of him! The top has a gold and red ribbon to add a bit of regal style to the whole look. Once your child has the entire outfit on, he may just be ready to command his own army!

Your child might be a few years away from becoming the Emperor of France, but you can get him ready for that glorious day by dressing him up as Napoleon Bonaparte! This Made by Us costume is sure to give your child the look they need.