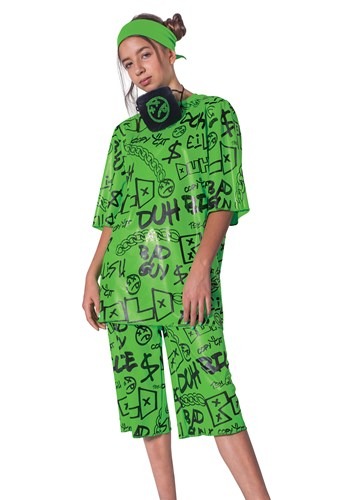 Are you a bad guy?

We're not talking about bad guys like Lex Luthor or the Joker. Those guys are cool and all, but they're not nearly as edgy as the person we're thinking about: an 18-year-old pop star who grew up in the trendy Highland Park neighborhood of Los Angeles, raised by two loving parents in a stable marriage, and now lives the comfortable lifestyle of a millionaire. We're talking, of course, about Billie Eilish, the reigning queen of electropop.

One reason that Billie shot to the stratosphere of the music scene is her distinctive and unique fashion style. Nowhere before have we seen artists dress in a weird way to attract attention! Most artists, like Lady Gaga, dress in really boring outfits like slacks and blazers. But Billie wears giant shirts! And giant shorts! In many alternating neon colors! You never know what she's going to wear next, whether it's a giant orange hoodie or a giant green T-shirt or a giant 1970s-couch-pattern sweatshirt. Truly she is a style chameleon, making it impossible what she'll look like at her next public appearance. We can only wish that we had such a refined sense of style.

Emulate your favorite "I'm-fourteen-and-this-is-deep" pop star with this Kids Classic Green Billie Eilish Costume. The edgy outfit looks just like Billie's famous neon green oversize shirt and shorts combo. The shirt features black "Duh" and "Bad guy" graffiti print patterns all over it, while the shorts match. There's also a matching green headwrap and green face mask, just like Billie wears. Whether you're attending a high-fashion awards show or just going to the grocery store, you're sure to stand out with this costume!

When the party's over...