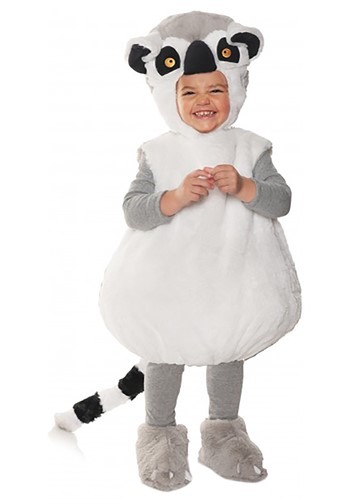 Lemurs are super cool. We'd have to say they're one of our favorite animals, just because of all the neat stuff they do. Did you know lemurs can jump more than 25 feet in one big jump? Also, their tails are actually longer than their bodies! And a group of lemurs is a "troop," which we think is a pretty cool way to describe them.

In fact, that makes us think of a military troop of lemurs marching around, wearing little uniforms and leaping from one job to the next. Maybe there's a bugler in front, sounding the charge. Maybe there's a troop of lemur paratroopers ready to join into the fray at the signal. There could be tank lemurs driving tiny tanks around and medic lemurs taking care of their injured friends. (We're guessing some of the injuries might come from being hit by tanks, since lemurs are notoriously bad drivers.)

We admit, there's really no such thing as a military troop of lemurs. But they're still really cute animals, so it makes sense to dress your little one up like one!

Your kid will be the cutest thing at the costume party with this Kid's Bubble Ring Tail Lemur Costume. The gray and white costume looks just like the lemurs you see at the zoo and comes with its very own black-and-white tail in the back. The head that fits over your kid's head features a lemur's face, while there are also gray sleeves and gray leggings to further complete the lemur look. Also included are gray furry lemur booties with felt claws. Once you put your child into this totally realistic costume, you'll be amazed at how much like a lemur they actually look. You might even think you accidentally brought a real lemur home from the zoo!

Your lemur-loving little one will be sure to have a wild time with this costume at your next costume party!