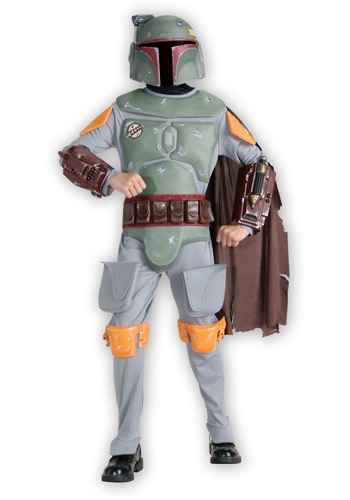 Who's the only bounty hunter in the Star Wars galaxy that's cooler than Boba Fett? Exactly, there isn't one! But in our own galaxy, your little Star Wars fan can look just like the infamous mercenary in this Deluxe Boba Fett Costume, and not even the ice planet Hoth is cooler than that!

Not much is known about Fett, which is just how he likes it. We know he's a clone of Jango Fett, the legendary Mandalorian warrior who was also the model for the Republic's clone army during the Clone Wars, but he disappeared for a while after Jango fell in battle. It's also known that Boba wears Jango's former armor, is every bit as skilled and deadly (maybe even more), and is a man of few words, just like his dad. After all, one can't be a notorious intergalactic bounty hunter by blasting around space and drawing attention. He's learned to be patient and wait for the right time to capture his target. But, also like his dad, the younger Fett is really good at blowing stuff up for those times when patience doesn't do the trick!

Hopefully, your little bounty hunter doesn't have to blast their way out of a tough situation while trick-or-treating, but in this awesome officially licensed costume, he'll look up to the task! The jumpsuit features built-in foam armor plates and gauntlets, and comes with a matching rubber utility belt, battle-worn cape, and helmet for extra authenticity. Get him the matching Jet Pack and a toy blaster, and that candy bounty will be all his when Halloween comes around!