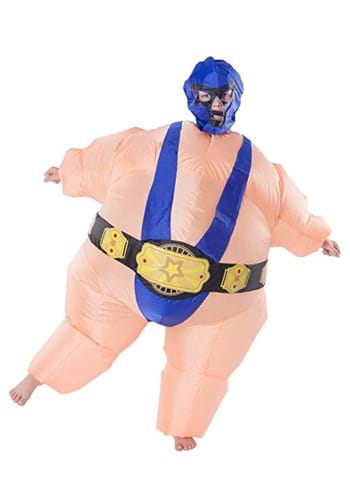 It may be a while before your kiddo hits the heavyweight class, but that doesn't mean they can't hold their own in the ring this Halloween! Before you try letting them pack on the pounds by serving them mac n' cheese and chocolate bars for every meal (your child's dream!), you may want to consider getting this Kid's Inflatable Blue Wrestler Costume, instead. It's a fun way to bulk up your little wrestler before the big match — and by "match" we mean the costume contest at school!

Whether your child is an avid wrestler, a forever fan, or just getting into the sport, this sumo-inspired look is an eye-catching, intimidating, and totally unique look for them to wear. Trick or treating will never be more fun, and who knows? Maybe some neighbors will throw in a few extra pieces of candy. That's a whole lotta wrestler to feed!

This inflatable costume will double, triple, maybe even quadruple the size of your little one, instantly. But that's not all. In addition to mass, they will also gain a cool wrestler look, thanks to the blow-up jumpsuit's styling to look like a wrestling singlet and belt. There is a built-in fan and battery pack installed in the costume, so your kid can take over the ring for hours and hours without losing steam. The included fabric hood/mask has an opening for the eyes, nose, and mouth, and it completes the transformation.

Well, look at that! Your "little" wrestler secured the costume championship title! We told you this look was a total hit! Now, about that mac n' cheese and chocolate...