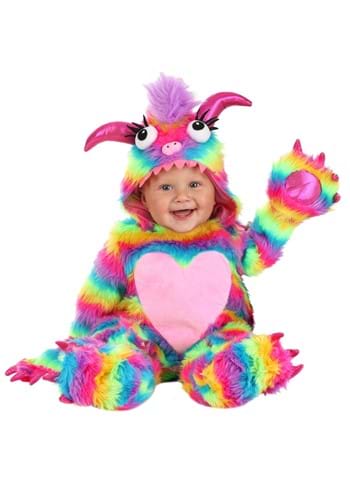 Things That Go "Peek a Boo!" in the Night

Did you hear that noise? It was almost like a thumping sound, and it came from the direction of the crib. Do you suppose it could be a monster? We've never seen a monster, but we've heard that they're terrifying! The tales all say they have sharp fangs and claws and like to crunch on bones. Probably should go take a peek before running away screaming...hmm. It's definitely a monster, but unlike any we've ever heard about. The only thing scary about it is how cute it is!

Give your little monster cutie something to growl about by dressing them in a Rainbow Monster Infant Costume! The one-piece outfit fastens up the front and has snaps at the inseam and crotch. Its made of beautifully soft faux fur striped with pink, purple, yellow, green, orange, red and blue. A heart-shaped inset is sewn over the torso. Pink pads and claws decorate the mitts and footies. The top of the hood has soft-sculpted eyes and horns as well as felt teeth.

All monsters are capable of causing lots of ruckus. This little one is no exception: You should see how fast it can throw cereal, crawl over to the stairs, or destroy a diaper! Thankfully, it makes up for all the messes by being completely adorable. This is one monster you wouldn't mind finding under the bed (although how did they get under there? They were just over by the play pen!)