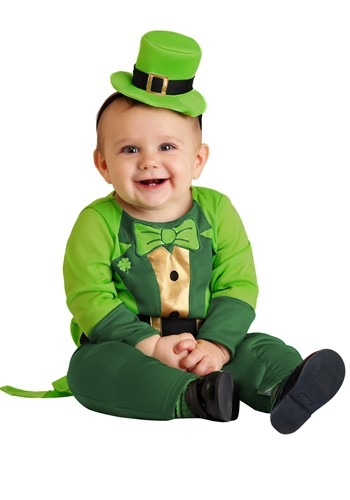 We've been hearing for decades about the presence of little green folks. Now, there was a major upsurge in talking about them after the Roswell incident in 1947 and the hub-bub of Area 51. But, it was far from the first time that these mysterious creatures were discussed. According to legend, they have been talked about in folklore for much, much longer! Mysterious faerie folk that appeared in the lands, dwelling in the hills!

Now, who knows if these little green folk are aliens or genuine fairy spirits. In fact, the oldest stories of them said that they didn't even wear green (most of them). They preferred much brighter and varied colors, though their style certainly changed as the stories became more popular in the west. Perhaps they missed their green hills. Or, perhaps, they are indeed creatures from another world that disguise themselves amongst us! All we know for sure? Boy, are they cute!

Channel the glorious history and ask for the luck of the Irish when you let your wee babe join the order of the aes sídhe—the people of the mounds. There are a ton of different types, but the leprechaun is probably the most famous. And, when you dress your baby in this Made by Us Leprechaun costume, you'll know exactly why. This costume includes a green onesie made of soft jersey fabric and featuring tuxedo jacket print. The hat is green and black jersey with a gold vinyl buckle. You'll both feel blessed all year round with this adorable attire.

The stories say that it is nearly impossible to catch a little green person—whether alien or leprechaun, actually—but your quest is already complete when your bundled baby is the leprechaun in question! Of course, that means that your pot of gold is also your cute kiddo, but we're pretty sure you'll be happy with that!