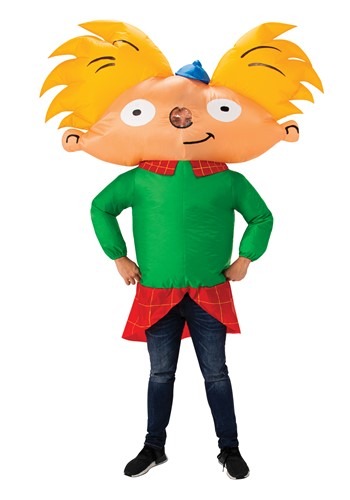 Information
Sold Out
Items Out Of Stock
Product Information

All you non-Nineties kids, sit down. Let us true millennials have our moment. Sure, other generations had everything from Looney Toons to Bob’s Burgers, but we had the kid whom everyone liked (even Helga – you’re not fooling anyone with your “Football Head” nonsense, lady!) His friend Gerald isn’t the only one to admit that Arnold is a bold kid, but he’s also really nice and funny! Who else do you know who would spend so much time helping others with their personal problems? Hillwood has never seen such a great guy!

Proudly sport Arnold’s football-shaped noggin in this officially licensed Hey Arnold! Inflatable Adult Costume. The Hillwood kid’s tufts of yellow hair stick out from either side of an attached blue beanie. His well-known untucked red button-down under a green sweater is printed on the 100 percent polyester windbreaker fabric. It inflates via an attached fan. Four AA batteries, not included, power this awesome costume. A clear viewport is placed where Arnold’s nose would be so that you can see where you’re walking. Maybe don’t chase after headless horsemen in this getup, though. You don’t want to pop your look!

Okay, okay, we guess that non-Nineties peeps can enjoy the magic of Hey Arnold! After all, the Generation Z kids did get a pretty fun feature movie with all our favorite Hillwood folks. We’re willing to split custody. You don’t even have to be a millennial to enjoy this Hey Arnold! Inflatable Adult Costume.