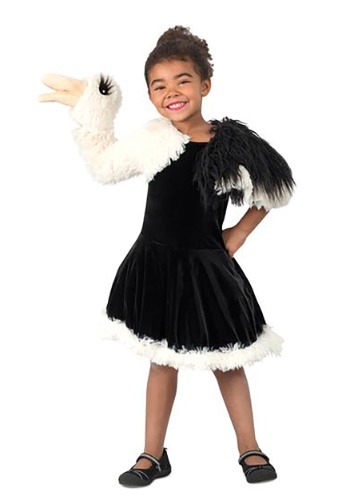 Maybe you're a world-famous face from children's wildlife television. Maybe you're the head of a castaway family from the Alps. We don't care who you are: we think you'll find this Girls Puppet Ostrich Costume really moving!

Okay, we do care who you are: that last part was kind of a rhetorical misstep. What we mean is that whether you have aspirations to be the President of the United States or a waiter at the local diner, this costume will look funny. Good funny, we mean. The kind that will make people laugh with you, not at you! Alright, they might laugh at part of you, but they'll be laughing at part of not-you, too. The goofy fake legs coming out of the ostrich's side! They'll be laughing at those!

That makes us want to stick our heads in the sand. But don't stick your Girls Puppet Ostrich Costume's head in the sand, because the face is one of the best parts. Just look at those eyelashes! The costume is a dress-based ensemble featuring a built-in petticoat and a ostrich-head puppet on the right sleeve. It flips back to free your hand if you need to ever halt the illusion!