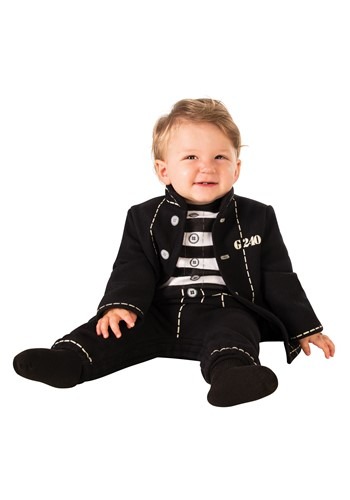 Is your baby always getting trouble... like, real trouble? We're not talking about trying to stage crib-breaks or swiping an extra cookie off the table. We mean legit crimes like taking your hotrod for a joyride or stealing Mommy's jewelry to sell it at the local pawn shop. Maybe you've got a pint-sized future prisoner on your hands. There's only one way to be sure, though: Watch to see if your little lawbreaker spontaneously breaks into hip-swaying, head-bobbing dance. If he does, we're sorry but there's no denying that you have a Junior Jailhouse Rocker.

But don't worry! All is not lost. Just because your sweetie-pie is doomed to the slammer doesn't mean he'll stay there. In fact, there was another super famous con who did pretty well for himself after he broke free from his bars. We're talking, of course, of Elvis... and who doesn't want their little kid to grow up into a real live King?

Shake your hips and curl your lip with this Elvis Presley Jailhouse Rock Infant/Toddler Costume. The cute costume looks just like what Elvis wore in his famous film. It includes a black onesie with white stripes on the "shirt" part and jean-style accents on the legs. There's also a black jacket with button accents, white stitching and the King's own prisoner identification number on the front. The only thing it doesn't include is some stylish blue suede shoes, but those wouldn't really go with the outfit anyway, since they're from a totally different song. Duh.

Sure, maybe your baby is better at rattling than rolling over right now, but with this Elvis Presley Rock Infant/Toddler Costume, he'll be ready to break into some rock 'n' roll moves in no time. Once his hair grows enough to style it into a pompadour befitting a king, he'll be really good to go!