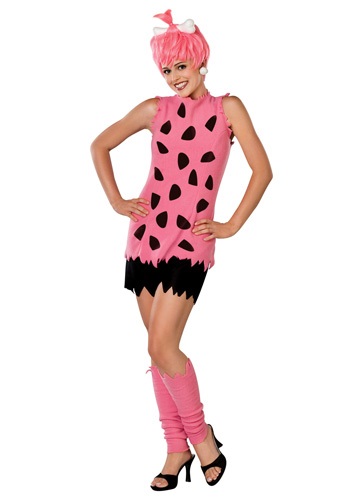 Pebbles Flintstone is not only the hippest young cavewoman in all of Bedrock: she's one of the most recognizable cave-people of all time. She and Bamm Bamm Rubble, her best friend, next door neighbor, and soulmate, share a love story that could be called Romeo and Juliet and Dinosaurs. Except that while the actual Romeo and Juliet ended in unspeakable tragedy, Pebbles and Bamm Bamm grew up, got married, had adorable twins, and have lived cheerfully in the imagination of millions since the Stone Age, whenever that was.

We're sure that a big part of the couple's longevity is connected to their sense of style. Just look at that sleeveless shirt, emblazoned with the prehistoric version of polka dots!

Look at that bony pink wig, those black shorts, and those pink leg covers, which seamlessly blend the edginess of ancient times with the active look popular in the 1980s! It's a shame that most modern-day humans think of this outfit as belonging in a museum, because otherwise we'd say it was pretty fresh.

And if you agree, why not get a matching set of dino-mite duds like these for you and your best pal? They may look old-fashioned, but they're compatible with all the latest technology, including motorized vehicles and electronic appliances. Even if there's a part of you that wouldn't mind trying out a mammoth-powered vacuum cleaner or a dino-driven lawnmower, the modern-day version of this outfit should be way easier on your feet!