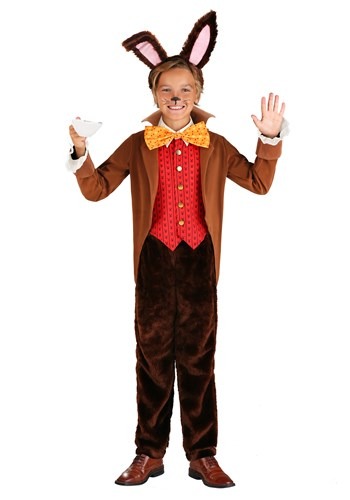 The Madder the Merrier!

You know what? All of the best characters in Lewis Carroll's Alice in Wonderland books are mad. Just take a look at all of the characters hanging out at the tea party scene. You've got the White Rabbit, who's just a tiny bit mad, mostly when he's running late. Then, there's the Mad Hatter, who's a little off of his rocker. The Cheshire Cat is a little bit wacky, too. Then, of course, there's the March Hare! That kooky character really takes the cake (or perhaps the crumpet).

Our costume designers wanted to craft a costume that combines a sophisticated tea party style with the delightful madness of the March Hare. This Tea Time March Hare Costume does that perfectly! It starts with a broadcloth vest that has a whimsical rabbit and stripes pattern. It also comes with decorative gold buttons in the front for an elegant look. The brown jacket is a faux suede material and fits over the vest and comes with ruffled sleeves. The pants are made out of faux fur material and fit with an elastic band in the waist. The yellow bow tie adds a pop of playful color and the headband really adds the finishing touch to the whole outfit! It has a pair of brown, faux fur ears attached to the top, so your child will be ready to assume the role of their favorite Wonderland character!

If your child wants to head to the next tea party in a complete mad outfit, then this kid's March Hare costume is just what they need. It even works great for school plays!