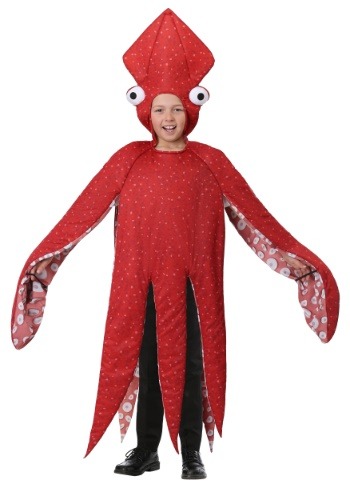 We Squid You Not!

Here's the thing you might not know: squid are incredible! For instance, did you know that in short spurts, a few kinds of squid can swim as fast as some sharks? Or that there are over 300 species of squid in the oceans? Or that female squid are bigger than their male counterparts? Or that giant squid are the largest invertebrates on Earth? No? Didn't you know any of that? Oh, well, that's strange, because we learned it all from your kid!

Yep, your child is basically a master of all things cephalopod. They've been reading up on these animals in every free moment they get. They want to be a squidologist when they grow up, and while that's not exactly the word for it, we think the sentiment is adorable! So, as Halloween rolls around, there is no better costume for your science-loving, clever-minded kid than this Child's Squid Costume! We ink it'll be a huge hit!

This exclusive look will be enough to have your little biologist leaping for joy (do squids leap? We don't think so). They will love wearing this cool costume around to trick-or-treat, regaling everyone they meet with their favorite squid facts. Two of the tentacles fit over the arms, while the others hang down in front and back. There is an awesome headpiece that gives your child the shape of a squid, along with their signature big, bulging eyes. The look is comfy to wear and classic—well, at least to your child. To everyone else who meets them, this will be the most unexpected costume of the night!

Two Peas in a Cephalopod

And what do you know? Now, your littlest child wants to follow in their footsteps and go dressed as an octopus! Well, they'll make a pretty cute pair as they glide through the streets together. We've never seen cephalopods eat candy before, but then again, there is much that science still doesn't know about these amazing creatures!