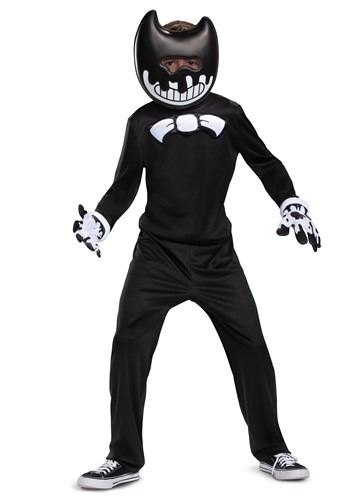 You creep through the dilapidated halls of Joey Drew Studios, jumping at every creak and squeak you hear. Your eyes peer in the shadows, straining to make out shapes in the darkness. You never know even he's going to appear. Your heart pounds in your chest like a jackhammer as you tiptoe along the hall, trying to sneak into Joey's office... but it's so far away. As you creep forward, you keep your eyes peeled for precious cans of bacon soup, or weapons like scythes, pipes or even plungers... anything to protect yourself from him!

Suddenly, he appears: Ink Bendy! He pursues you through the studios as you frantically try to escape. You can hear his raspy breath behind you... He's gaining!

Add a little black-and-white terror to your kid's next costume party with this Child's Bendy & The Ink Machine Ink Bendy Costume. The black jumpsuit is 100 percent polyester and looks just like Bendy's costume from the popular game. The costume comes with an attached fiber-filled white bow, while there is also a pair of white gloves made of foam. Of course, Bendy wouldn't be Bendy without his terrifying grin, which your kid can sport thanks to the included plastic mask, which is shaped like Bendy's head and has mesh-covered eye holes.

Before you can twist away, Ink Bendy has wrapped long, black fingers around your ankle. No matter how hard you kick and scream, you can't get away as he drags you into the gloom. The last thing you see is his twisted grin...

When you open your eyes again, Ink Bendy is nowhere to be seen. You push yourself to your feet. What happened? Did he let you go? You sway unsteadily, reaching out a hand to lean against the wall. That's when you notice: Your hand is covered in black ink. Frantically, you look down, panic rising as you realize your whole body is covered in ink. You're no longer you... You're a cartoon, just like Bendy. There's no escape now.