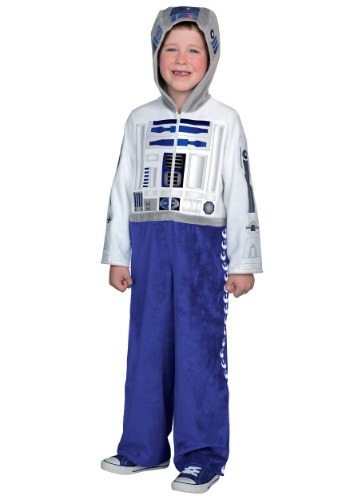 Kid's White Costume Gloves
$4.99
Add
Product Information
Items Included
Features
How many times did R2-D2 save the day when Han, Luke and Leia were in trouble? Why don't we list off a few of his heroic feats during the Star Wars movies! First, he delivers Leia's distress signal to Obi-Wan Kenobi, so he can orchestrate a rescue mission. Then, there was that one time in the trash compactor inside the Death Star. Then, he delivered the Death Star plans to the Rebel Alliance, allowing them to blow it up. Later, in Empire Strikes Back, he fixes the hyperdrive so the Falcon can escape Bespin. After that, during Return of the Jedi, he smuggles Luke's lightsaber into Jabba's Palace, so Luke can rescue Han. Yeah, it's pretty safe to say that R2 is one heroic little droid and although your child might just be starting his journey, we're pretty certain he's going to be just as heroic as R2-D2!

This R2-D2 costume is a deluxe Star Wars costume for your kid! The costume zips up in front and has droid detailing on the the front. The top portion looks like a hoodie and features the white and blue look of Artoo. The hoodie is designed to look like his dome-shaped head, while the bottom portion of the costume is blue with Rebel Alliance symbols along the pant legs. Of course, you might have to teach your child how to beep and whistle like Artoo if you want him to be the best companion to have during a trip to a galaxy far, far away.