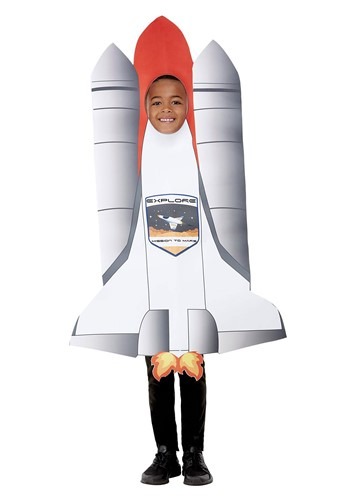 Everyone thinks astronauts are so cool, and they are. They bravely go where no person has gone before, like the Moon, and... well, that's about it, so far. But someday they'll even farther, like Mars. And they have to really work hard to prepare from their job, both mentally and physically. Not many people can do what they do, and they risk death all the time.

That being said, we think astronauts get a little too much praise. There is another extremely important member of the space exploration team, one who almost never gets proper kudos. We're talking, of course, about the rocket. Everything astronauts do, rockets go through too! Rockets also withstand crazy G forces and spent months away from their families, and they also take the brunt of the heat generated during reentry into the earth's atmosphere: up to 2,900 degrees F! Let's see an astronaut do that!

So people shouldn't be too confused when you announce your intentions to dress up like a rocket for your next costume party. It's high time these wonderful space vehicles get the recognition they deserve! We only hope we can help your noble quest with this authentic looking costume!

Shoot for the stars with this Child Blast Off Rocket Costume. The costume is made from 100 percent polyester and looks just like a space shuttle, complete with blazing fuel thrusters! There's a foam panel cut in the shape of a spaceship, with a cutout hole for your face. There are also two elastic straps around the arms and waist that attach to the panel with a hook-and-loop fastener.

There is bound to be at least three spacemen at your next costume party, but we guarantee you'll be the only one showing up like a space rocket! And that is pretty cool!