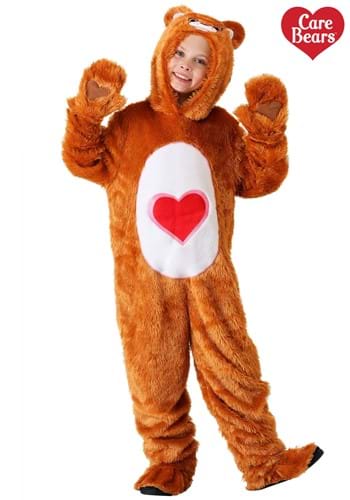 Everyone loves the Care Bears. Maybe it's their cute teddy bear appearance. Perhaps it is the iconic history that they've had on television over the last few decades. It's almost certainly because of how much they care and bring happiness and cheer to the world. (We suppose we could all just be magically charmed by their belly badges to love them by default, but we're pretty sure they wouldn't do that to anyone.)

So, it goes without saying that our favorite of the Care Bears must be their doting leader. Tenderheart Bear is always ready to put a smile on someone's face and show the whole team what caring really is all about. Who else could lead such a group of cuddly carers other than the bear with the single heart belly badge that is obviously the main symbol of the whole team! (You know that because of the heart symbol on all their rumps!)

Help your kiddo live out their dreams of Care-A-Lot with this exclusive and officially licensed Tenderheart Bear costume from the classic Care Bears. This comfy jumpsuit is made of soft material and colored golden brown just like the fearless leader. The white patch on the belly features the heart with a single pink border. (Of course, the heart patch is on the rear of the costume, too!) The hood has Tenderheart's embroidered face with soft-sculpted ears. Mittens and boot covers finish off the look, but you can always team up with more Care Bears costumes to complete the team!

We cannot promise that your kiddo isn't going to use their belly badge to try to convince you to give them more sweets. While the Care Bears would never misuse their powers in such a way, your kiddo might have a small learning curve. That said, we think they totally deserve an extra cookie.