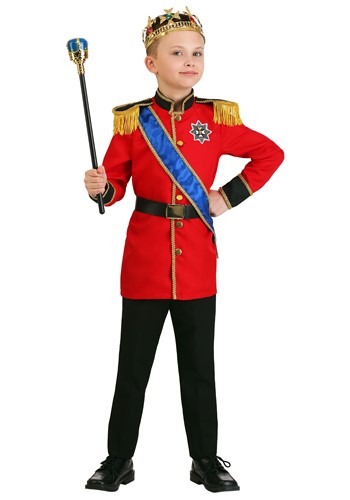 CHILD KING FOR THE FUTURE

Usually, when we hear about the child king, we picture a young squire running into the middle of a long-forgotten square and trying his hand at lifting a legendary sword out of an ancient stone. There will be doubt and tests and eventually some fanfare as the new monarch is about to be named. But, that was a long time ago! A literal legend that fell into folklore once Merlin couldn't quite manage to predict all of the future.

Then again, the story does say that the grand monarch would one day return. That eventually when the time was right, we would have another chance at lasting peace in a world that was brought back to balance! Boy, if that isn't something that we could all get behind right about now! Of course, this modern monarch can't walk around in medieval royal garb. We've got updated styles that have a little extra flash and elegance!

It is just about time for the coronation and we've got your little one's imperial attire ready to go! This Made By Us European King costume is a gleaming red jacket with all the bells and whistles. Well, actually, there aren't any bells or whistles. (We need to be clear about that since we do have musical costumes, too.) This features a bright blue satin sash edged with golden braid and metallic trim along the cuffs and seams. It has black epaulets with golden cord fringe and a heraldic emblem on the chest. The belt features a brass-tone buckle. All you need now is a crown or scepter to finish off the look!

The only thing you'll need to worry about once your kiddo is geared up for the royal affair will be the proclamations that will soon follow. Ice cream for dinner! Extra video game time! Nobody has to work! Pets must cuddle on the couch! (Actually, that's all sounding pretty great.)