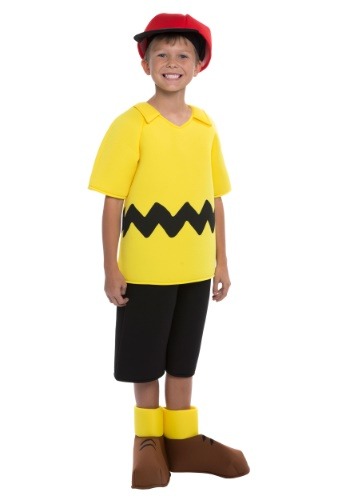 No matter how much bad luck gets thrown his way, Charlie Brown never gives up. His baseball team can’t seem to get a win. Lucy constantly teases the poor guy. His dog, Snoopy, is far from normal and cause him plenty of grief and that red-headed girl that he’s got a crush on doesn’t seem to know that he even exists. And, we didn’t want to mention it, but the kid is already going bald at the tender age of 8. Despite all of that, he’s out there every day, doing his best, trying to be a stand-up kind of fellow. That’s why we think that the underdog Charlie Brown is a pretty good role model!

When the good-natured kid becomes your child’s role model, he’ll learn to get up when he falls down (even when Lucy doesn’t play fair). He’ll learn how to keep his head up, even when things don’t go his way! And now, your child can actually become like the tenacious young Peanuts character. All he needs is a can do attitude and this officially licensed costume.

This Charlie Brown costume for boys is a quick and easy way for your child to assume the role of the Peanuts character. The costume comes with his signature yellow shirt that has a zig-zag stripe across the front and a small collar around the neck. It also comes with a pair of yellow and brown foot covers to match the top. The finishing touch to the outfit is the red ball cap, which looks just like the one worn by Charlie during his baseball games.

Once your child is all dressed up in this outfit, he’ll be ready to head out to the baseball field to lead his team to… well, probably not victory, but he’ll at least be able to give his team the support and encouragement that they need!

Size Chart
4/68/10
Inches
Centimeters
Costume Sizing Tips
Questions & Answers
There are no questions for this item yet. Be the first to ask a question!
Ask a Question