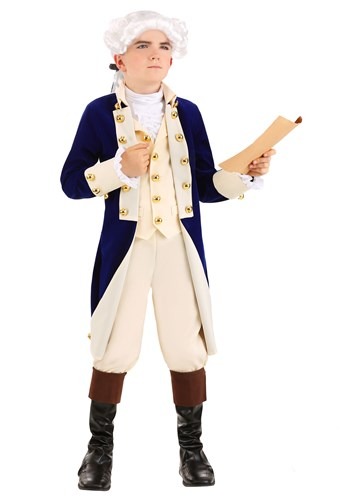 Who would've known? Alexander Hamilton has risen to fame once again, after almost 300 years. He went from being known as "that guy who's on the front of the 10 dollar bill" to the amazing dancer who also shaped American history in a big way! These days, kids even want to dress up like the historical figure and not just for plays and historical school pageants. Kids want to dress up like one of the Founding Fathers of the United States of America for Halloween, costume parties, and we've even seen a few kids playing dress up as Hamilton in the backyard!

Honestly, we can't blame them! Hamilton has a great story and, quite frankly, he was a pretty snappy dresser for a historical figure. This Boy's Alexander Hamilton Costume captures his colonial look in perfect style!

Our costume designers looked at plenty of portraits of Alexander Hamilton to create a look that will have your child ready to fight a revolution! The costume starts with blue jacket that has plenty of gold, decorative buttons. It also features a pronounced collar and sleeve cuffs to add to the colonial style. The vest is attached to the coat, making it easier for your little one to get dressed. The cravat fits around the neck with a simple fastener in back. The white pants match the vest and fit with an elastic band around the waist for a comfortable fit. Finally, the included boot covers add the finishing touch to the costume! Your child can wear them with most pairs of shoes, so your child can wear their favorite shoes with the outfit.

It's easier than ever to dress your child up like the man on the 10 dollar bill. Your child won't be able to contain their excitement and will probably want to put on a music performance based on the accomplishments of Alexander Hamilton!