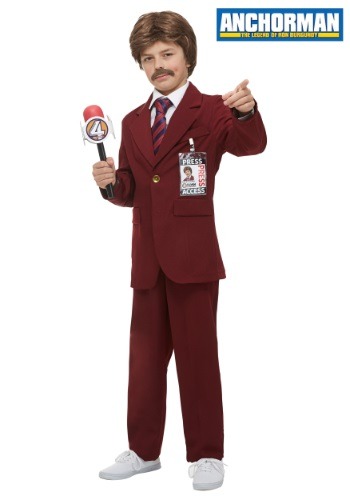 Veronica Corningstone Wig
$14.99
Add
Product Information
Items Included
Features
Is he dashing? Does his room smell of rich mahogany? Does he have a voice that could make a wolverine purr? Is he, we don't know how to put this, kind of a big deal? Then it's time to face facts, you have a little Ron Burgundy growing up in your home. And we think you should embrace it by getting him this Anchorman Ron Burgundy costume for kids!

Of course to do that he's going to need a suit so fine that it makes Sinatra look like a hobo, so that's why we made and designed this exclusive costume. It's officially licensed by Paramount Pictures, and of course it comes with all the details that will turn him into San Diego's star newscaster. When he's got this suit set in his repertoire, there's just no saying what he's going to add to the Legend of Ron Burgundy!

Styled as a rich maroon suit jacket and pants ensemble, this set also includes a wig, mustache, tie, and a press badge, so your little guy will have no problem transforming into the legendary KVWN Channel 4 newscaster. And all he'll need to hit the road to do a remote broadcast is our official Anchorman Microphone prop (sold separately). When he's got this authentic look, he'll be ready to report on Panda Watch 1974 from the San Diego zoo, or even just broadcast the goings-on at his own local costume party. Stay classy, little dude!