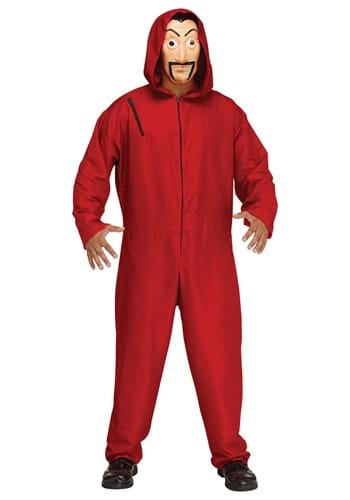 Sometimes, even when you’re just lazing around the house, it is fun to throw on a costume and do regular stuff in them. We have a guy in the office who consistently shows up in a perfect vampire costume and it is pretty awesome to sit across from Dracula or Frankenstein in a meeting! Nothing spices up going to the copier for the fifth time like seeing a pirate and a Roman Centurion refilling the toner.

But sometimes this fun habit has detrimental effects too! Like last week when Dave had to run to the bank, forgetting that he was wearing this Adult Red Bank Robber Costume! When word went around the office that he was arrested for it, we had to act fast. We sent out one of our managers, conveniently dressed as the Chief of Police, and he sorted everything out. Phew!

Red It and Weep

Although there are some places you probably shouldn’t wear this particular costume, if you did decide to take that tack, you would at least know that you would be comfortable in it! The adult-sized, red, hooded jumpsuit is 100 percent polyester and zips all the way down the front. The plastic mask is held on by an elastic strap, which makes it easy to put on and take off, just in case you need to go to the bank without scaring anyone.

If you would rather lounge around the house than actually rob banks (hopefully that is all of you), then this is the perfect costume! If you need to binge a show, you might as well cosplay it in comfort. This Red Robber costume will make you feel like an expert thief without actually needing to leave your couch.