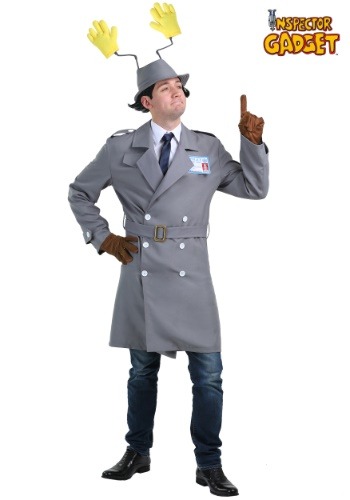 You'd think a detective that's been through what Inspector Gadget has would have learned a thing or two by now. Since M.A.D. seems to always have it out for him you would think his guard would be up. Not that we're judging too hard, after all the villains he's faced he must have a lot on his mind! Just imagine how scary it would be to have an evil robot version of yourself wandering around out there somewhere!

Sure, it's not fair that the police department gave this poor detective so much responsibility and so little backup. Hey, wait! We can't focus on pitying Detective Gadget for long, let's spend some time envying him! Wouldn't it be awesome to put on your hat, say go-go gadget copter and be at work in no time? That's right, forget traffic because of that incident with a banana peel you're basically a new man! Can't quite see your favorite singer at a crowded concert? Just use your extendable neck to shoot above the crowd and use your binoculars that are attached to see every syllable come out of the rock star's mouth!

*Sigh* What a life that would be. Well, don't go chasing down any banana peels, if you slip no one is coming to change your whole bionic makeup, you'll just end up with a sore back and a hefty hospital bill! Instead, enjoy this Inspector Gadget costume, no you won't be able to extend your neck but you will get to wear those handy hands on your head, great for when you're frantically high-fived by a crowd for having such a great costume!