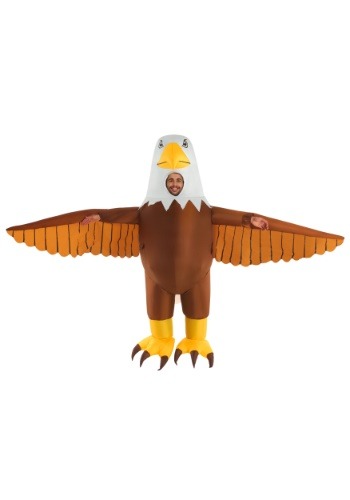 There are right ways and a wrong way to show your patriotism. The wrong way? Well, half-baked patriotism. That just makes us so angry. If you're going to honor your country, why not do it with enthusiasm. What would have happened if they would have stopped halfway when building the Washington Monument? It would just be a short, stubby tower of white bricks. We doubt that people would pause long enough to even take their selfie with such a sad and confusing structure, no matter what it stands for. What if, instead of four presidents built into Mount Rushmore, we had simply constructed a wooden billboard with their faces painted on it in that general vicinity. Would anyone visit that and contemplate the general splendor that rides from sea to shining sea in this fine land of ours? We think not.

No, when it comes to honoring our country, we don't go halfway. That's why, whether you're dressing up for Halloween or the Fourth of July parade this year, make sure you don't hold anything back with this inflatable bald eagle costume! The fan on the interior runs on batteries to keep you aloft all night. With a tall, stern bald head and wide wings that move with you as you flap, this costume makes an instant impression when you walk in the room.

Oh Say, Can You See

While this eagle costume does not give you the ability to fly, you'll surely make hearts soar when you walk into any room while wearing this look! We can see you posing with a red, white, and blue background for an unbeatable profile picture that you can bring out every independence day. A brave costume like this one is a great way to flaunt your patriotic feelings. We can see it being a hit. Can you?